You Found Fargo Ghosts Are Here

You Found Fargo Ghosts Are Here: PROOF watch this proof that they live among us!

This is a pretty cool video. Cops are chasing down a speeding car. During the entire clip I was waiting to see the guy to turn off his lights and disappear and thats the ghost car. Was surprised to see the ending and still cant figure out how he did it.

You Found Fargo Ghosts Are Here:Unexplained World is A Chicago Based Cable Show by Edward Shannahan,

which explores the world of Hauntings and Ghost. This episodes Looks at the Haunted Caves of Minnesota.

You Found Fargo Ghosts Are Here: This Is freaky....

Posted by Find Fargo Real Estate or FM Realtors at 11:14 PM No comments:

Fargo - Moorhead train tracks - There are train tracks that go through Fargo and Moorhead. A couple of years back, a woman tried jumping on to a train but instead was dragged all the way through town. Her body was later found with nothing really left. A couple of homeless guys were sleeping by the train tracks and reported seeing the woman. He woke up to see her in the distance with glowing red eyes. He thought if he was to shut his eyes and ignore her that she would go away. He opened his eyes to see if she was gone but she was only closer with her red eyes still on him. Frightened, he awoke his friend and they left to seek slumber else where.

Fargo - North Dakota State University - Ceres Hall - There have been many weird happenings on the 3rd floor of this building, most believe that it has to do with a man who hung himself from a heating pipe during WW II. In the basement: hairs stand up on the back of the neck, a strong feeling of fear forms in the stomach and the "fight or flight" instinct kicks in with most people leaving the basement in a hurry. The presence and sense of evil is much stronger in the basement than on the third floor which seems to have a separate entity occupying it.

Fargo - North Dakota State University - Minard Hall - Back in the 1920s the 4th floor attic in the building which was built in 1901 was the dance room. Nobody knows what exactly happened but in the morning the janitor found two people dead. The investigators thought that it was a double homicide. After that incident the ballroom closed and was turned into a zoology lab. And then in the 1960s it was closed off because of unstable floorboards. After that kids have snuck up there and held séances. Strange feelings of something there and not being alone.

Fargo - Northern School Supply Warehouse - This building, built around 1910, is haunted by the ghost of a small boy who fell down the elevator shaft many years ago. People working there late at night have reported hearing a child crying from inside the elevator shaft, sounds of running feet, and the apparition of a small boy who will appear and stand there staring at you.

Fargo - Riverside Cemetery - Reports of EVPs being recorded. Also reports that a cassette recorder placed on top of a particular crypt will record knocking noises coming from inside the crypt.

Fargo - Shanley High school - This building was built in 1951 as the parochial high school. There were a few strange happenings. A teacher was working late one night when she heard footsteps in the hall she looked out and saw no one. In the gymnasium an electrician was working on an air-conditioning unit that was located under the bleachers when he happened to look up and he saw a hooded figure float from one wall to another through a solid brick wall on both sides. A young lady was working at night cleaning on the third floor for two nights. And for two nights she saw a girl come out of a closed door in the hall and go right through a picture of Mary on the opposite side. For some reason all of the ghost activity has been seen around the theatre. Soon Shanley high will be torn down in November and turned into apartments.

Fargo - Trollwood Park - Trollwood is currently home to the performing arts school and has had numerous ghostly reports. It was discovered to have been the home of a pauper's cemetery and you can see the three locations where people were/are still buried. These are now marked with small stone monuments. The most common occurrences are the ghost of a lady seen dancing around a willow tree while the students are performing or music is playing. She appears blue/grey and in 19th century dress. There have also been EVPs recorded and the voice of an old farmer that used to reside there is heard telling people to get off his property. Others report the feeling of being followed, seeing people walking around that aren't there when they look again. Voices calling to them and being "touched" These are just a few of the reports heard.

Fargo - Yunker Farm - The Children's Museum - The entrance to a 2nd story terrace becomes unlocked by itself. There are two doors, both locked with deadbolts. One becomes unlocked repeatedly - when there is only one person with a key - and this person has not been near the door. The elevator sometimes goes up and down without anyone in it. There is a presence of not being alone - not malevolent. This house used to house a family with 10 children in the early 1900's. The ghost is lovingly referred to as "Vanessa" after the mother of these children. It is not known if anyone ever died there - or of who the ghost may be.

Grandin, North Dakota,
YOU BE THE JUDGE
Posted by Find Fargo Real Estate or FM Realtors at 12:50 PM 2 comments:

You Found Fargo Ghosts Are Here: This One Scared The Hel@ Out Of Me!

You Found Fargo Ghosts Are Here: Best Proof Of Ghost EVER 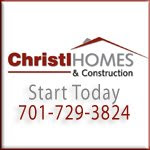 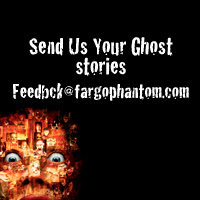 Welcome to Ghosts are here. We all love a good scare, and if you love ghost videos, you've come to the right place. We're here to provide the largest collection of scary ghost videos available on the net. Think it's too good to be true to see a ghost caught on video? Or maybe you think a real ghost videos are just a myth? Browse around for a bit and you are likely to think differently.

Send Us Your Real Ghost Story.
Click Here
YOU BE THE JUDGE